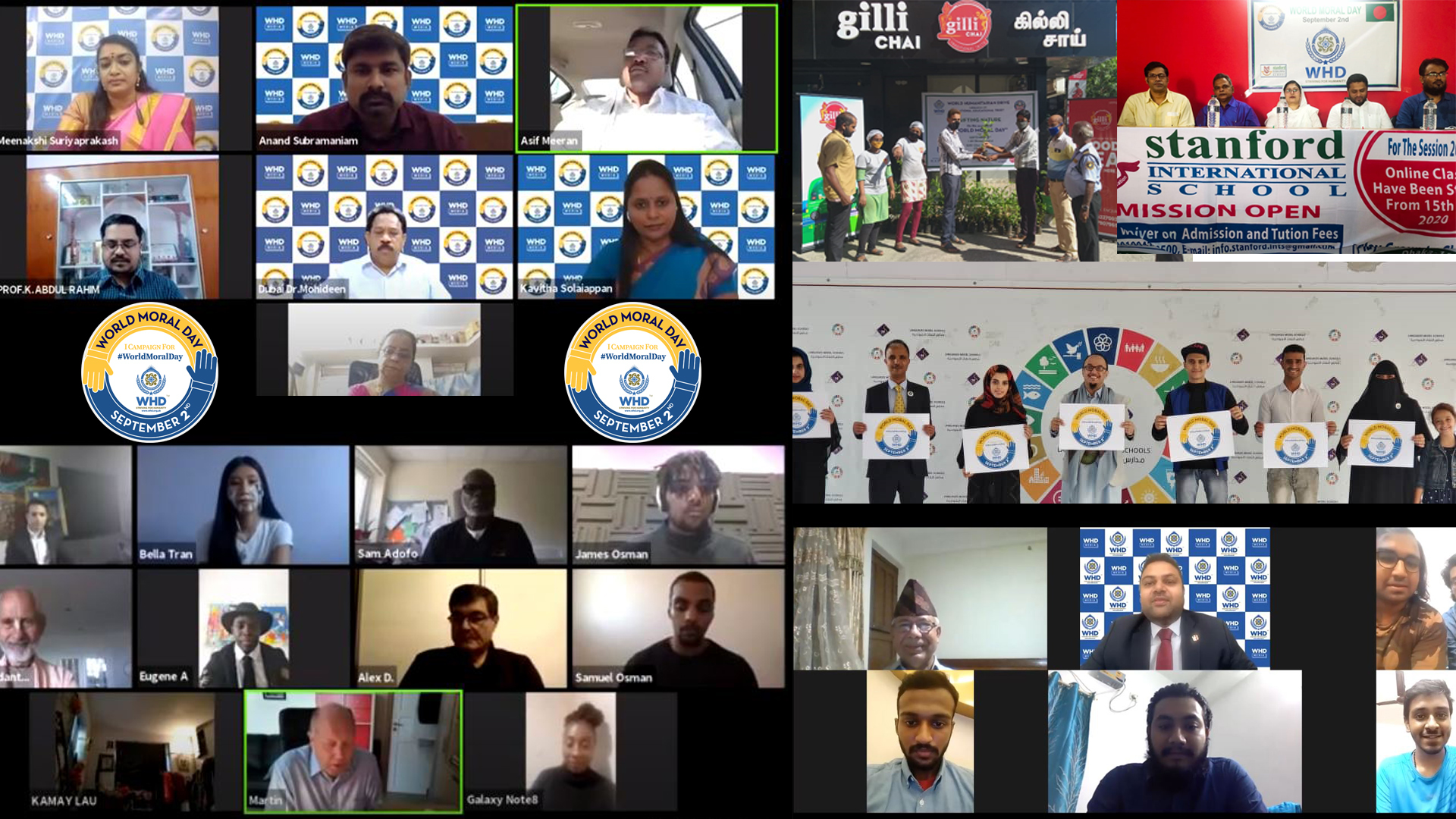 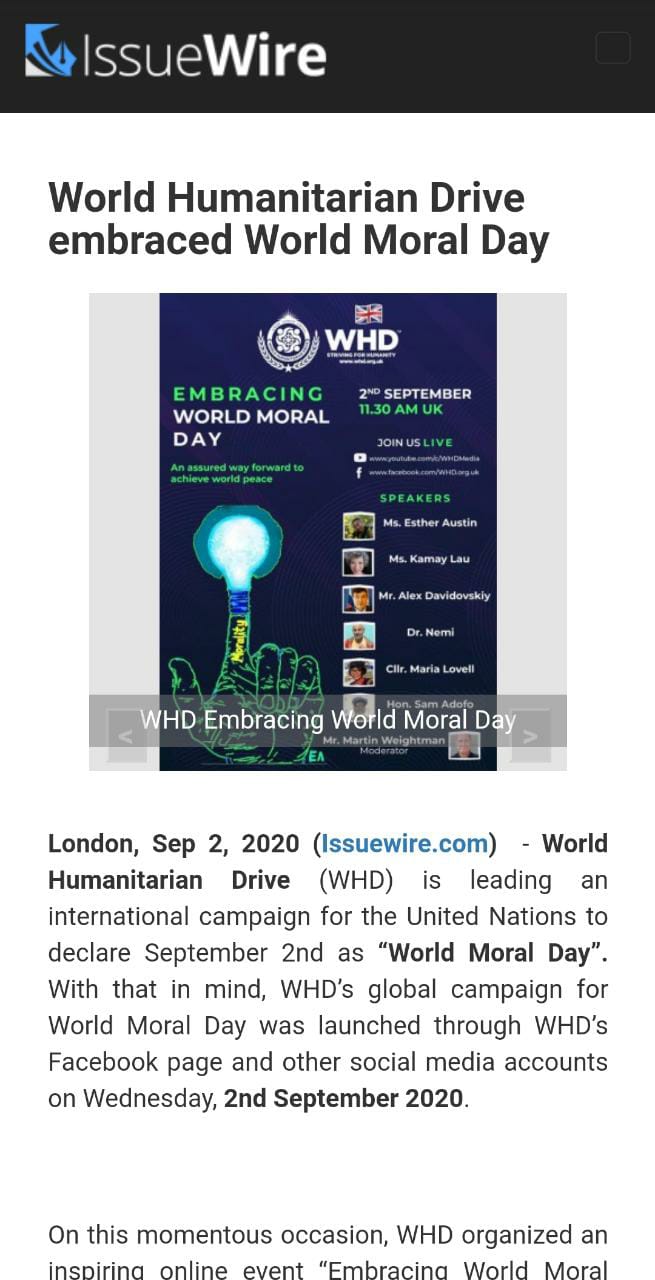 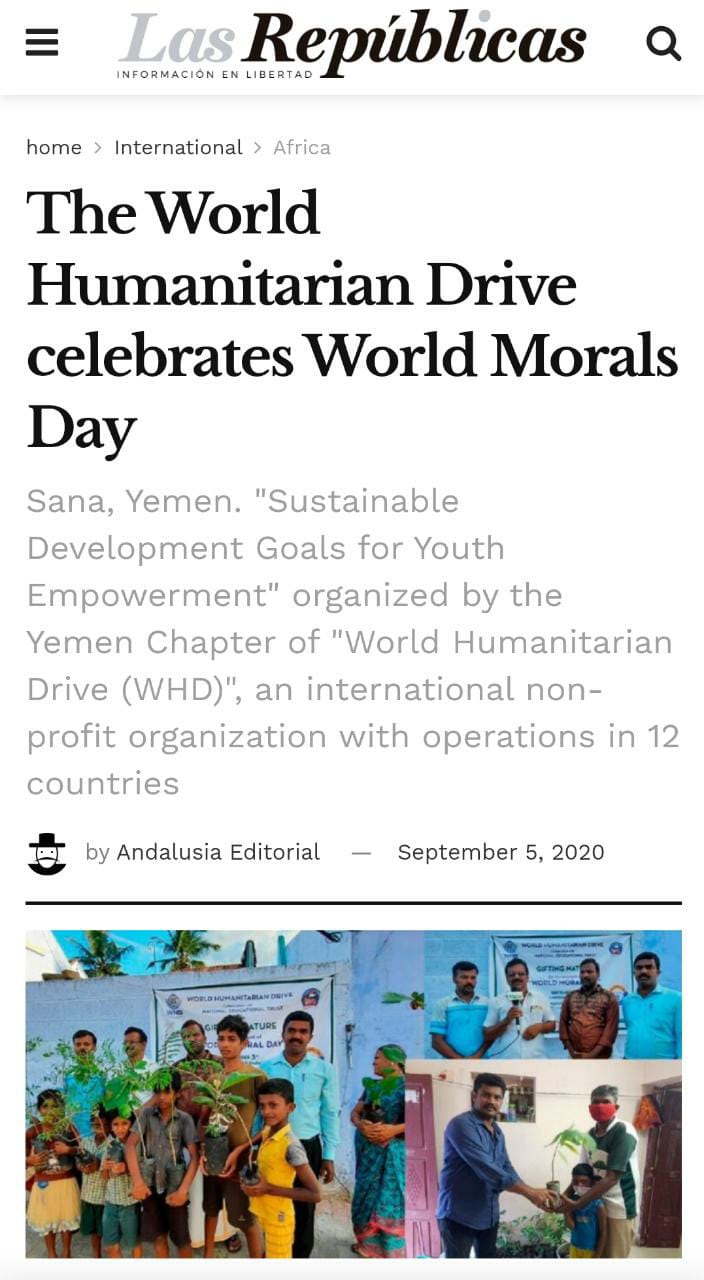 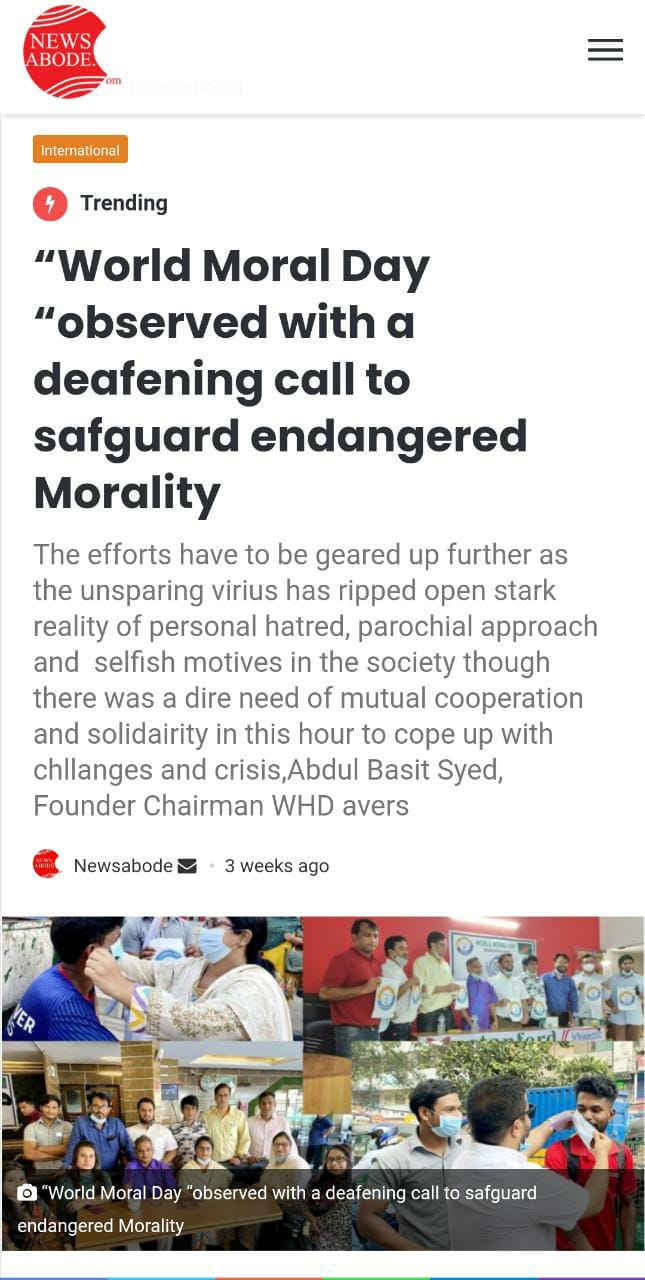 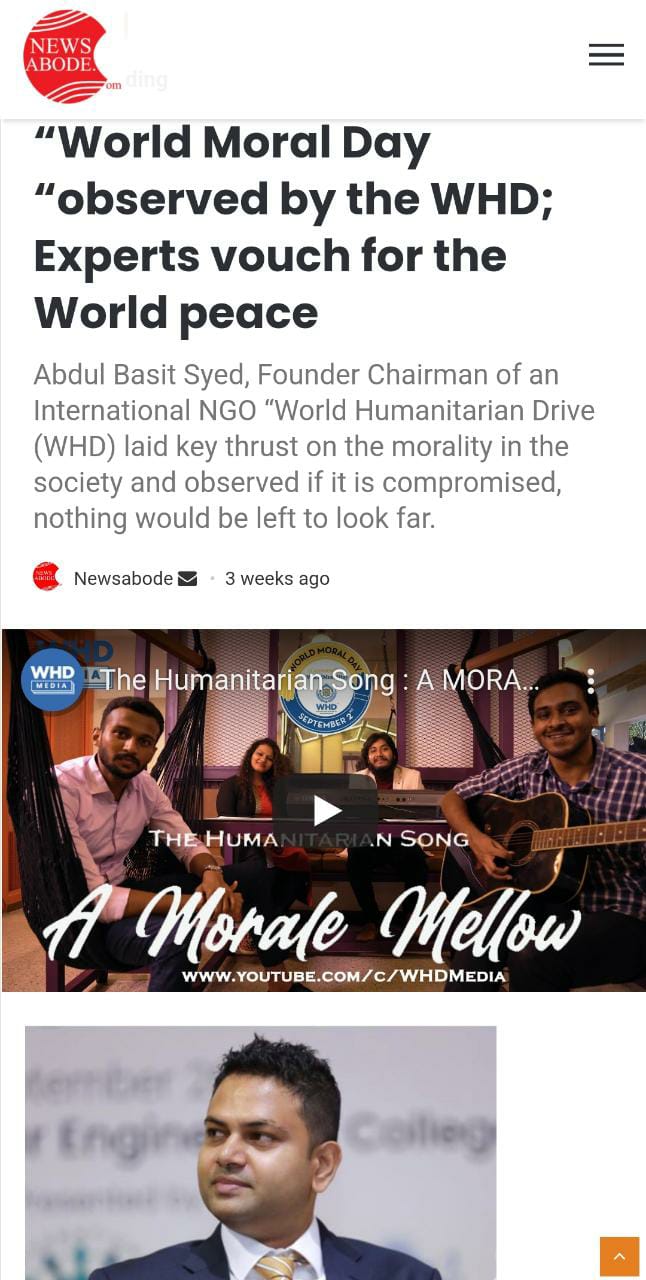 
WHD India Chapter virtually organised an Overseas Peace talk on September 21st #InternationalPeaceDay based on the foundation pillars of governing and peacekeeping and highlighting the importance of Integrity and Equality. The event was conducted in the oldest regional classical Tamil language.


"Youth Empowering Sustainable Development Goals”
The role of youth in today's world is predominant as youth seek for more arenas in every element of global development through their determination to succeed, and it is WHD's vision to empower them to contribute more incredible things for their nation and to the world.
This remarkable event organised by Dr Fouad ALGhaffari to strengthen the ties of youth with the understanding & vision of SDGs of U.N., as any challenging task can be accomplished with the support of right minds.
During this event, Yemen members voiced their support for the U.N. to declare 2nd of September as "World Moral Day". The voices of Yemen is prominent and decisive as understanding the significance of Peace and harmony delivered through this noble campaign of World Moral Day.


"Embracing World Moral Day”
This is a remarkable day in history as the concluding day of WWII. "World Humanitarian Drive" (WHD)" organised "World Moral Day" on 2nd of September, as a reminder to embrace morality for Peace celebrated by thousands of members, supporters and friends. The world requires many significant contributions from different fields, but most important is to incorporate "morals and values" in them. Progress without morals; profits without ethics; development without humanity; and prosperity without Peace, can disrupt the structure of our human society. WHD understood these societal problems and designed its events to create awareness and to remind people of the significance of truth, loyalty, generosity, integrity, compassion, honesty, love and equality. Mr.Eugene Ankomah Secretary General of WHD UK Chapter organised this virtual event and presented the welcome address. A slide show presentation followed it on the importance of morality and a series of impacting contributions from eminent personalities, like Dr Nemi, Ms Esther Austin, Dr Alex Davidovsky, Ms Kamay Lau, Mr Blake Gibbons and Hon. Sam Adofo shared his excellent thoughts on the support of "World moral day". Excitements filled the audience with the poem recitations by Mr Jim Osman and Ms Bella Tran, as Poems are a powerful tool to convey emotions and thoughts. The ambience was made more blissful with a live Acapella performed by Mr Sam Osman and opera singing performed by Ed Mizra. The "World moral day" support video created by youth board members of the WHD India chapter and shared their testimonials to make an impact on the importance of "World moral day". Founder Chairman of WHD - Dr Abdul Basit Syed, gave an exceptional Vote of Thanks showing his gratitude to all the noble supporters of WHD for making this event a great success all around the world.


This prominent event is organised by Mr Ratan Kumar Das, Secretary General of WHD Bangladesh, who is a well known Humanitarian, to reach the grassroots level of masses in Dhaka. He presided this commendable event with their team of highly spirited volunteers Mr Firoz Alam Sumon, Mr Syed Azmul Haque, Mr Ariful Islam Razib and Mitaly Karmakar. Despite the challenges of the pandemic, they strive for a successful event for "World Moral Day" by distributing aids like PPE, mask & gloves, food and other essentials to the needful. Hearing the voice of hunger and responding to it with the message of love and care is the moral duty of every human being. WHD, as an organisation started to promote this idea of goodwill through noble initiatives, ideas and strategies. These proceedings are a direct inspiration of "World Moral Day".


"A Morale Mellow” - A compilation song to facilitate "World Moral Day" was released by the Honourable Chief Guest H.E. Madhav Kumar Nepal, Former PM of Nepal. He extended his strong support for the campaign "World Moral Day" during his speech and inspired people to stay in the path of righteousness and commended the efforts of WHD initiatives. The former Prime Minister also praised the dedication shown by the youth as an admirable herculean task for creating the dream of "World Moral Day" to become a reality in a song format. This event was assisted by Ms Janaki Gurung, Secretary General of WHD Nepal Chapter. This song was entirely recomposed by the WHD Indian Youth Members and was highly appreciated by a wide range of audience all around the world.


"Gifting Nature" – A Commendable humanitarian activity is done by WHD India Chapter in collaboration with National Educational Trust from the inspirations of "World Moral Day".
WHD sincerely appreciated the facilitator of this noble activity Dr A. Mohamed Mohideen, a recipient of the prestigious Global Humanitarian Award. The event began with planting trees, distributing seeds and saplings free to thousands of people organised in 3 different cities in Chennai, Tirunelveli and Kallidaikurichi in Tamilnadu, India.
This initiative of planting and preserving vibrancy to nature will prevail as a testimony of WHD inspirations from "World Moral Day" for the future generations. The desire to have a "World Moral Day" as a way of life is not only a moral dream of WHD and its Founder Dr Abdul Basit Syed, but it is imperative in the making. WHD has further announced multiple future events in the 12 countries. There were various operations during September 2020 in dedication for their campaign of "World Moral Day".
WHD as an organisation striving with passion and displaying resolute efforts in organising multiple events, initiatives and programs in different countries to unify the force of humanity with love. It is the primary objective to achieve the desired results of Peace and happiness in this world.


On account of "World Moral Day" campaign on September 5th, a seminar titled "Moral of Existence" was virtually conducted from the United Arab Emirates. Seven renowned speakers presented various topics about Morals, and it's dependencies concerning our daily existence. The speaker and journalist Mr Mudhuvai Hidayathullah presented his views about Services to Community, language researcher Ms Sri Rohini spoke about living with love, Mr RJ Naga insisted on loving nature. Ms SJK Sharmila conveyed the importance of communal harmony. Dr. A. Mohamed Mohideen was the ideator of this program and highlighted the significance of Service to the Mankind.

This event converged together to signify love, nature, language and community, which need to be based on morality to lead a happy life. The event intended to remind people that with the right conscience and moral values, we can understand to make the right decisions even in challenging situations. The program began with the introductory address from Mr.Mustafa Mubarak. It ended with a conclusive address from the Secretary-General of WHD Malaysia Prof Dato Dr GP Doraisamy with an enormous hope to spread moral values to enhance peace and harmony.