WHD USA put together the event as a Black History Month Tribute and raising awareness around COVID-19 vaccination. 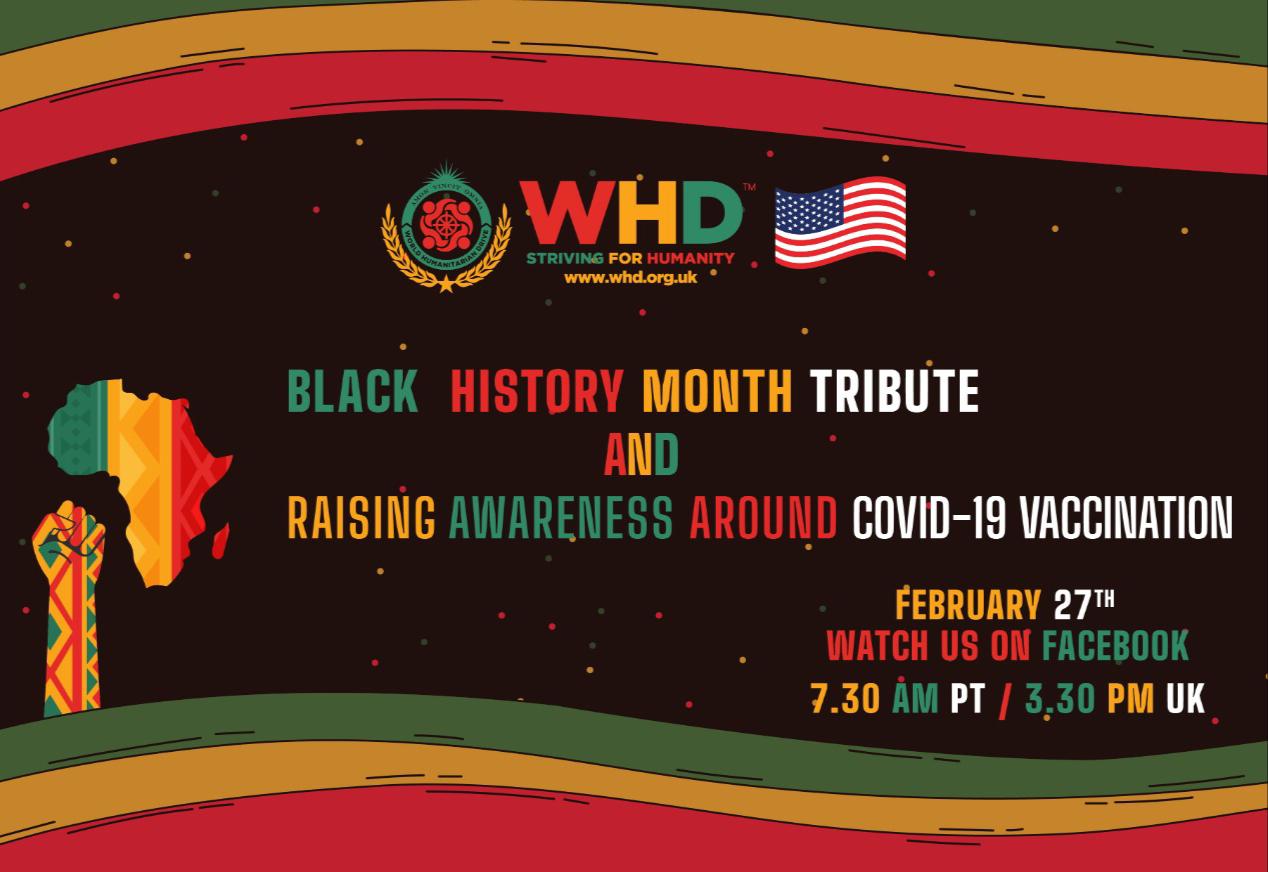 
WHD USA Chapter presented "Food Resolutions in 2021". John 'Baton' Mitchell hosted as he interacted with the Food Connoisseurs.Reagan Leigh Thomas, National Coordinator of WHD USA has been a boon in putting together this wonderful event.Special mention of thanks to all the wonderful chefs - Jason Licker, Dilip Barman & Tony Thornes and Deputy Secretary-General of WHD USA Danielle Joynes. 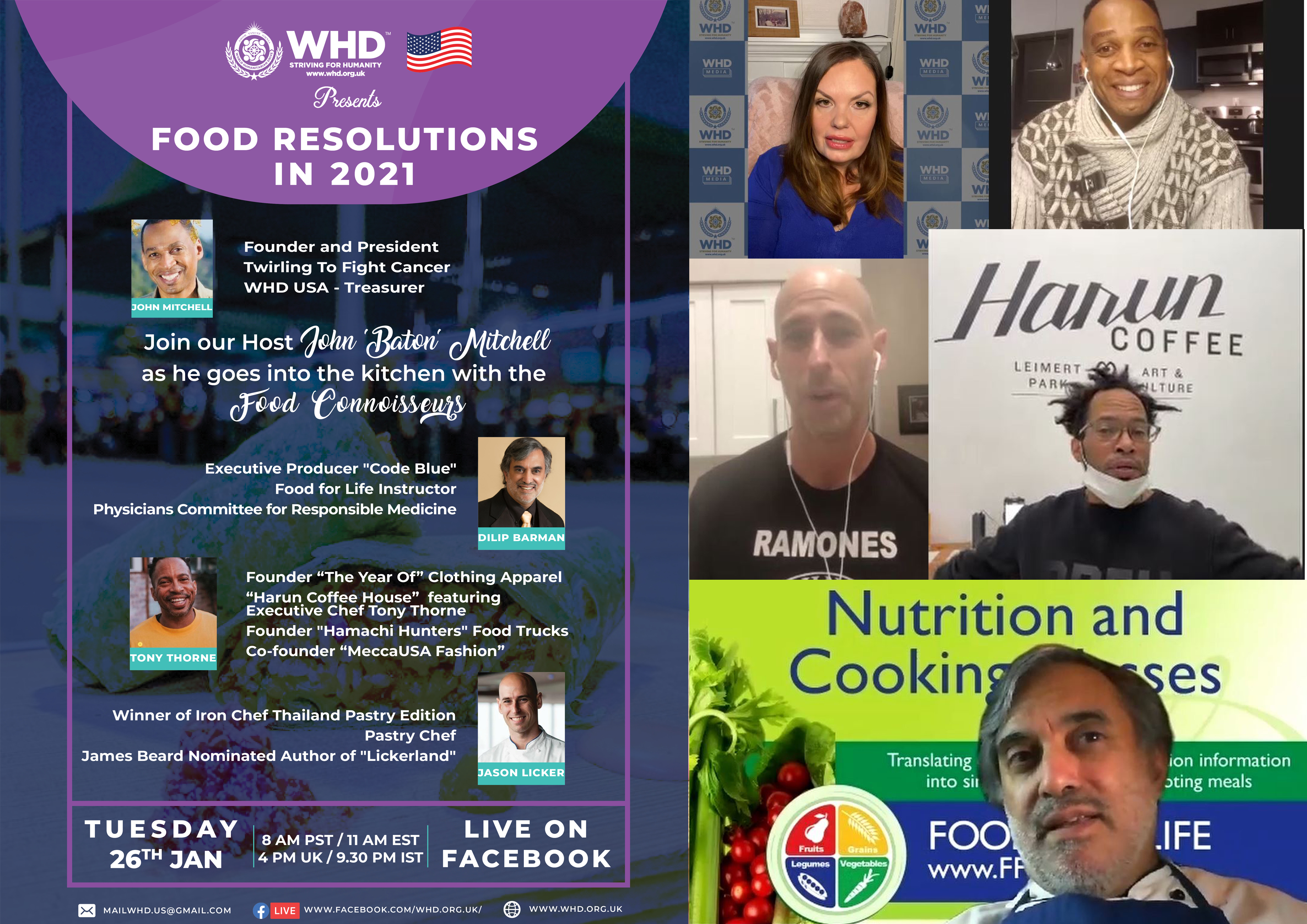 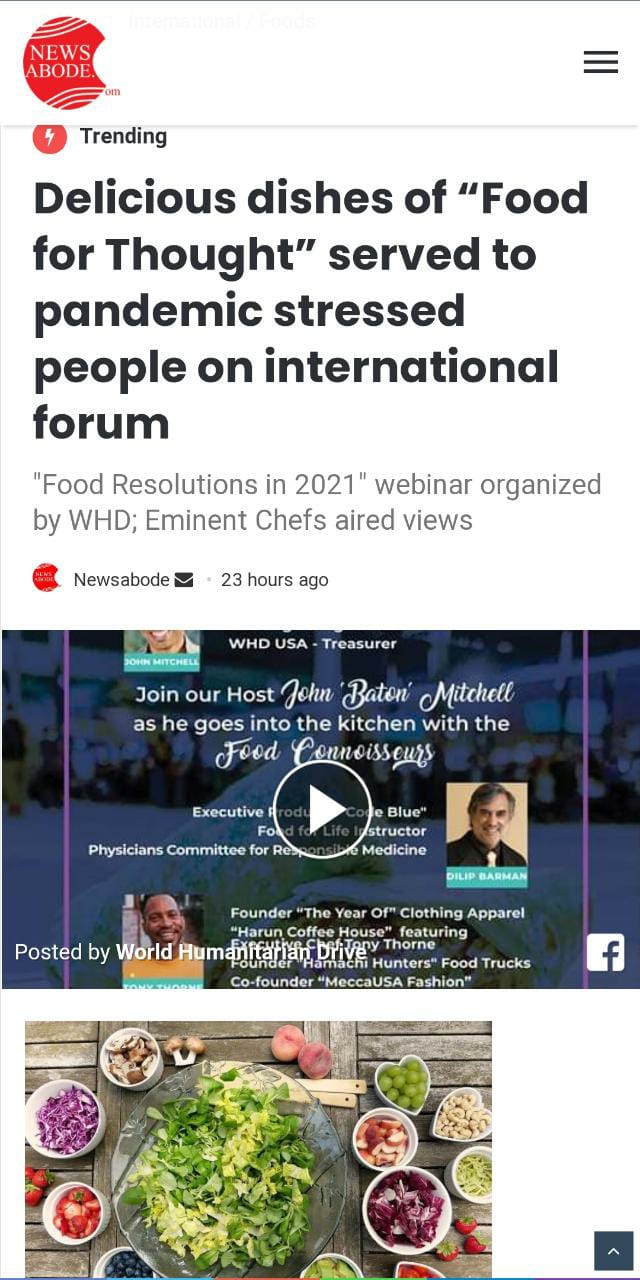 
WHD Malaysia had organized the International Peace Forum on the theme- "Road to Peace in the New Millennium" and strongly batted for spreading the virtue of humanity across the world which is grappling with both inter and intranational conflicts that jeopardize peace on the planet earth. Experts were of the firm view that it was the time of hand-holding rather than undercutting each other for parochial Interests. There were speakers from 5 different countries such as UK, Russia, USA, Germany and Malaysia 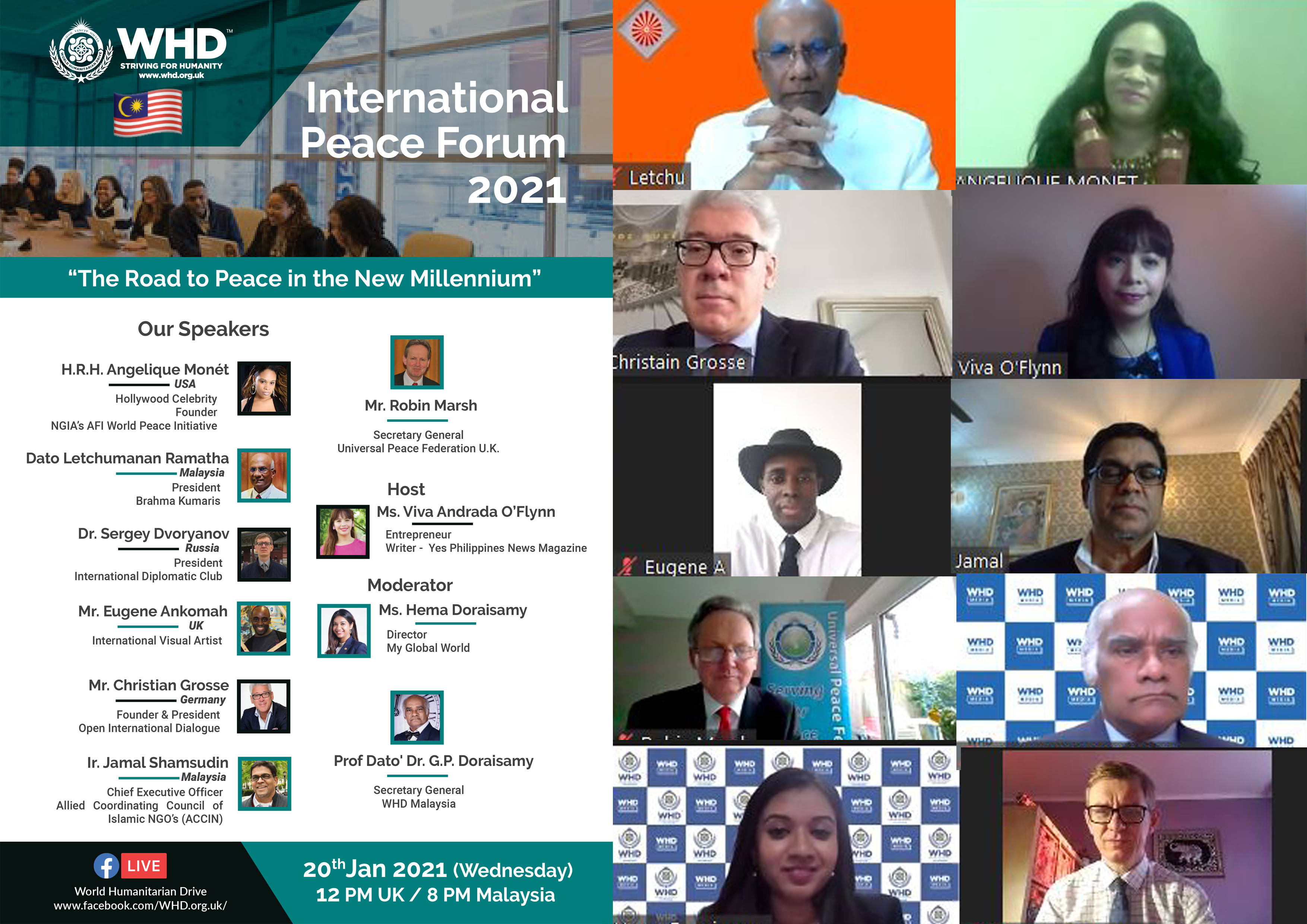 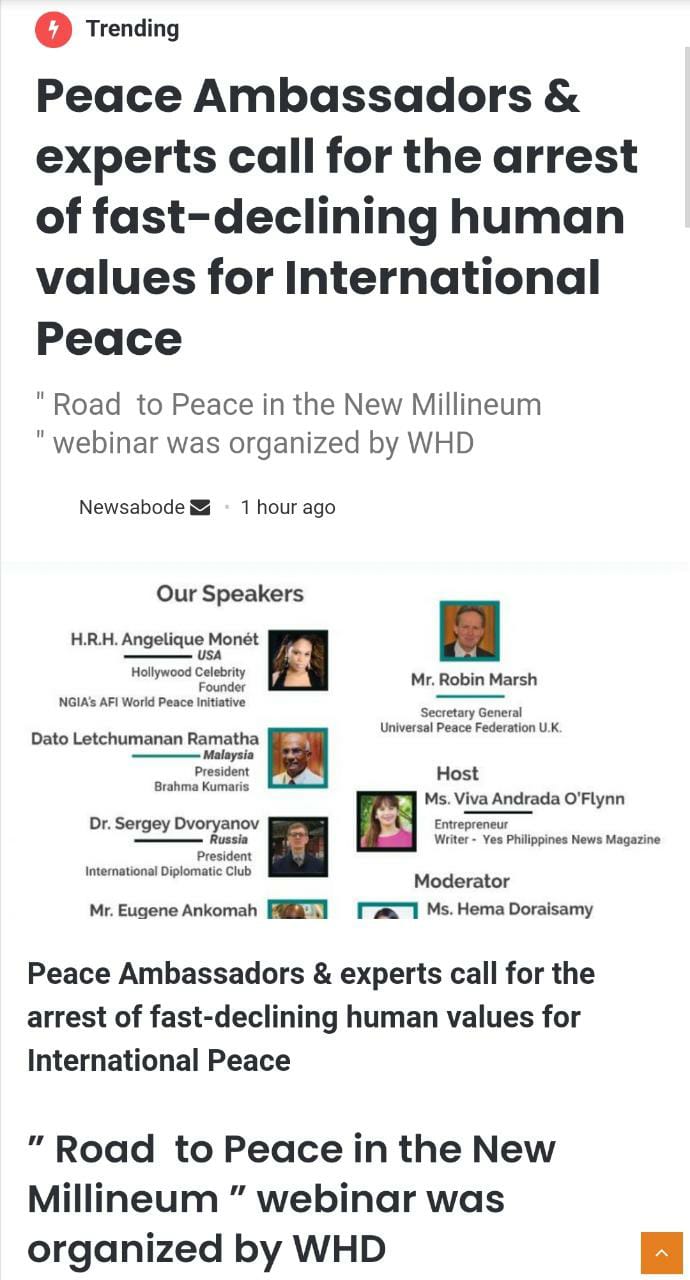 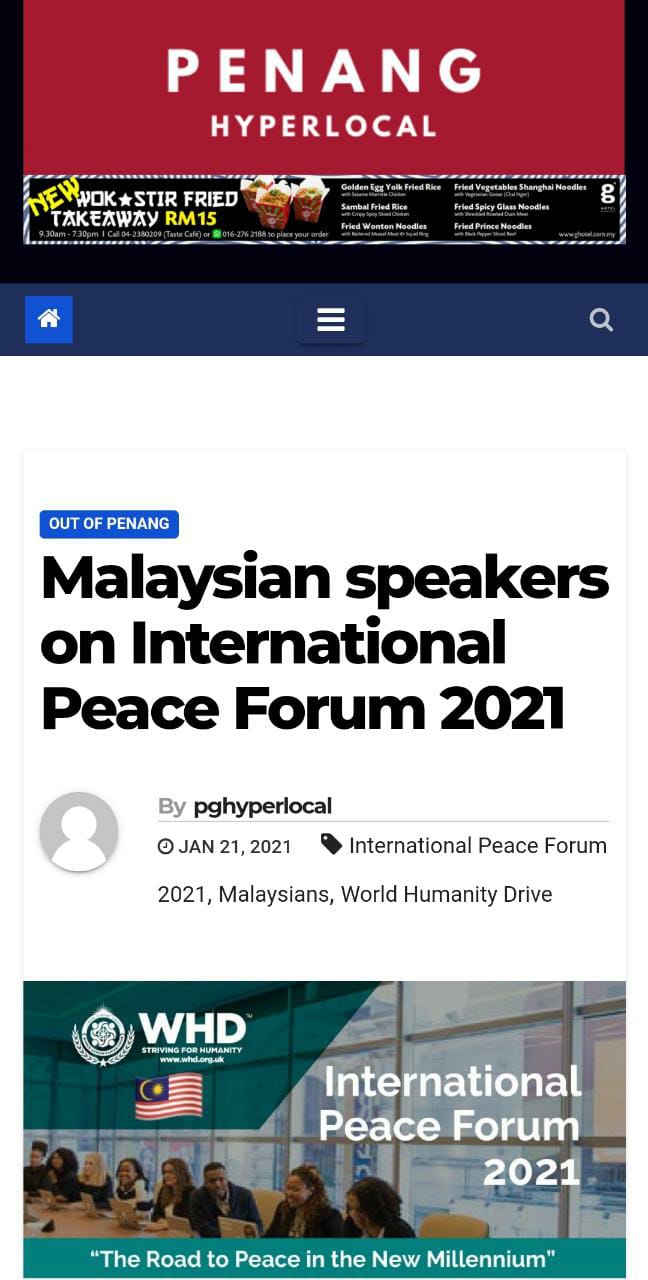 
As we approach the end of our year, WHD Founder was extended an invitation to join front line police officers on a tour of duty in Croydon U.K. The idea is to offer an opportunity to witness how they respond to the public and their calls for service and to provide a “behind the badge” look into how they operate. Police officers very much appreciated on WHD's opinion on how to improve relations within our communities and welcomed open discussions to work better collectively. 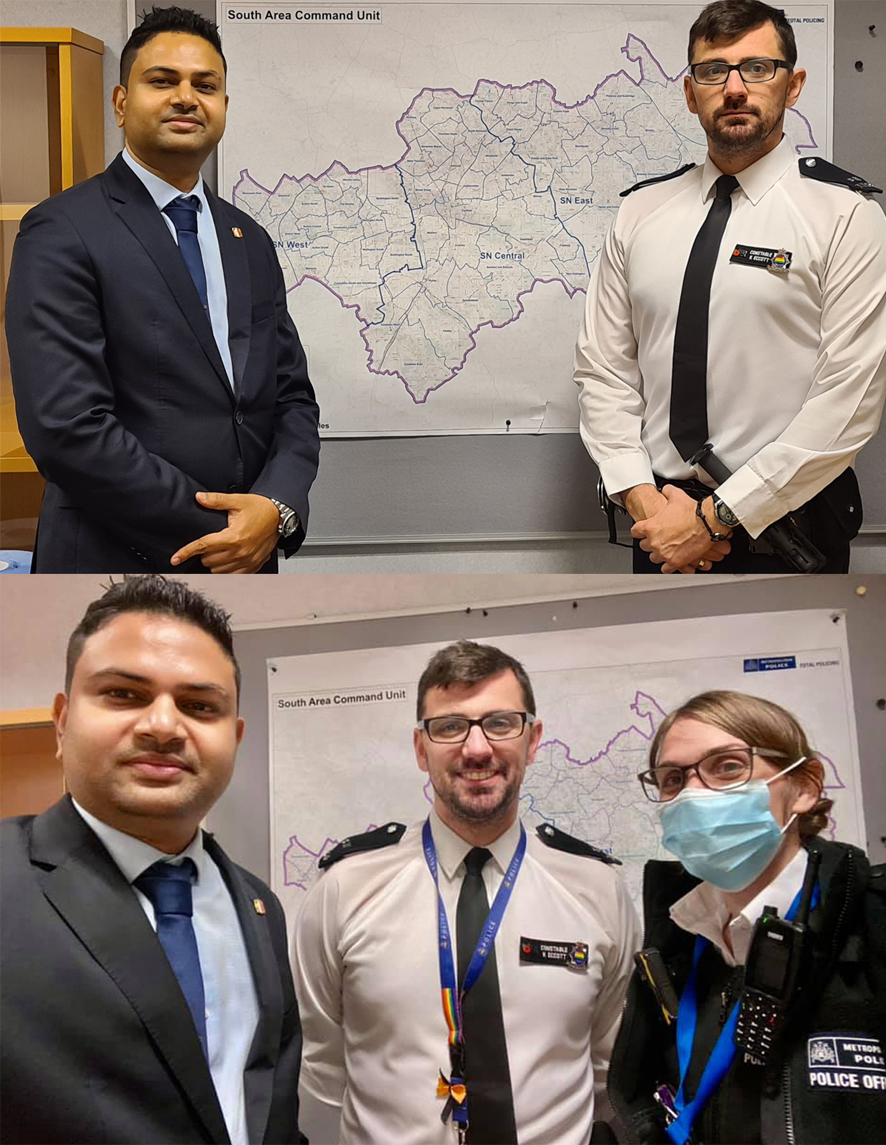 
His Holiness The 14th Dalai Lama, the highest spiritual leader of Tibet, considered a living buddha received the Title of Honour “Patron of Humanity” award presented by “World Humanitarian Drive (WHD)”. WHD Board of Directors unanimously announced and presented this honour for His Holiness’s lifetime achievements in serving humanity and in acknowledgement of His Holiness humanitarian service to mankind by contributing for harmonious solutions in trying to help individuals achieve peace of mind. The Founder Chairman of WHD, Dr. Abdul Basit Syed, stated “We are humbled and honoured to be presenting this prestigious title to His Holiness which will surely boost up the morale wellbeing and spread positivity to all world leaders to work for peace by strengthening cooperation and stability in this world.” 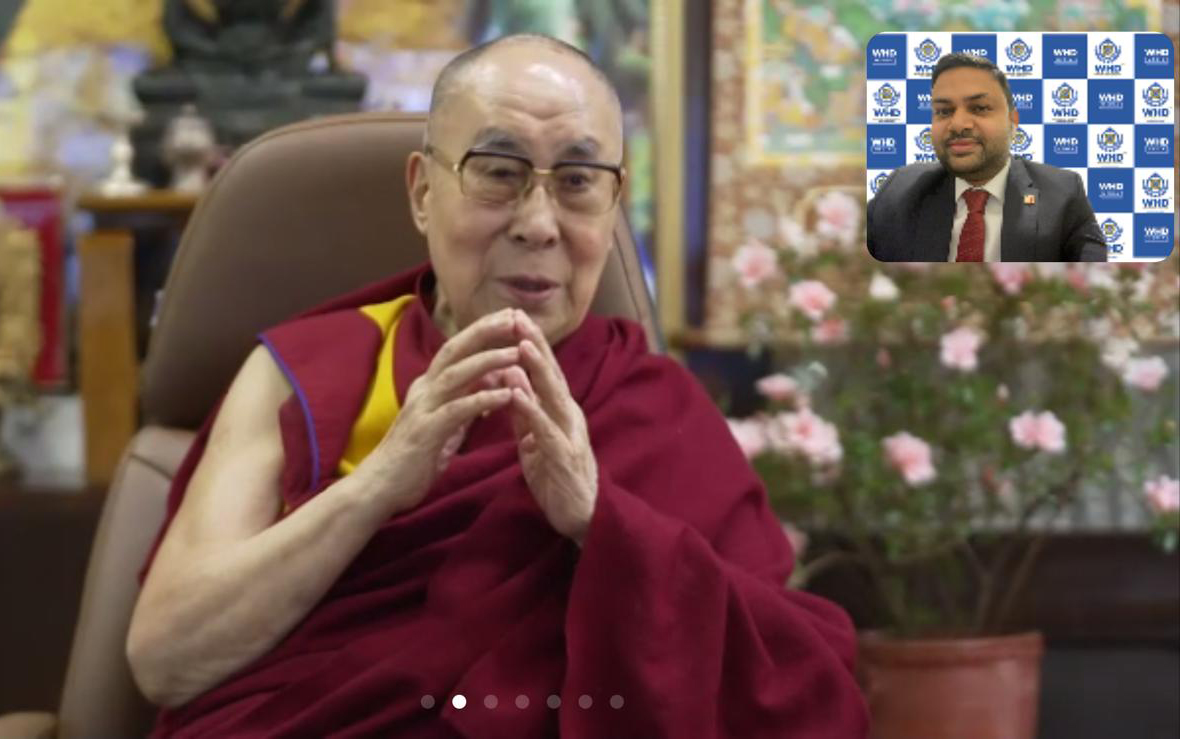 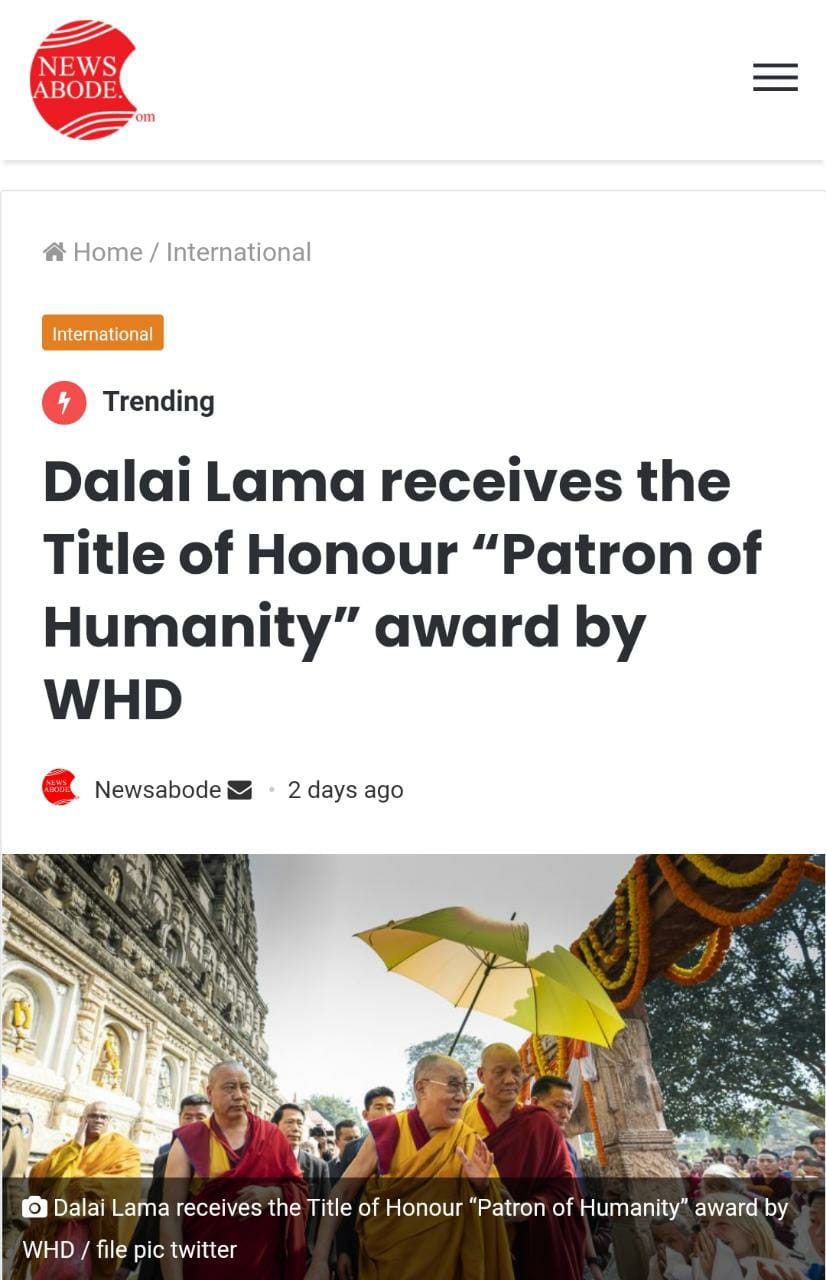 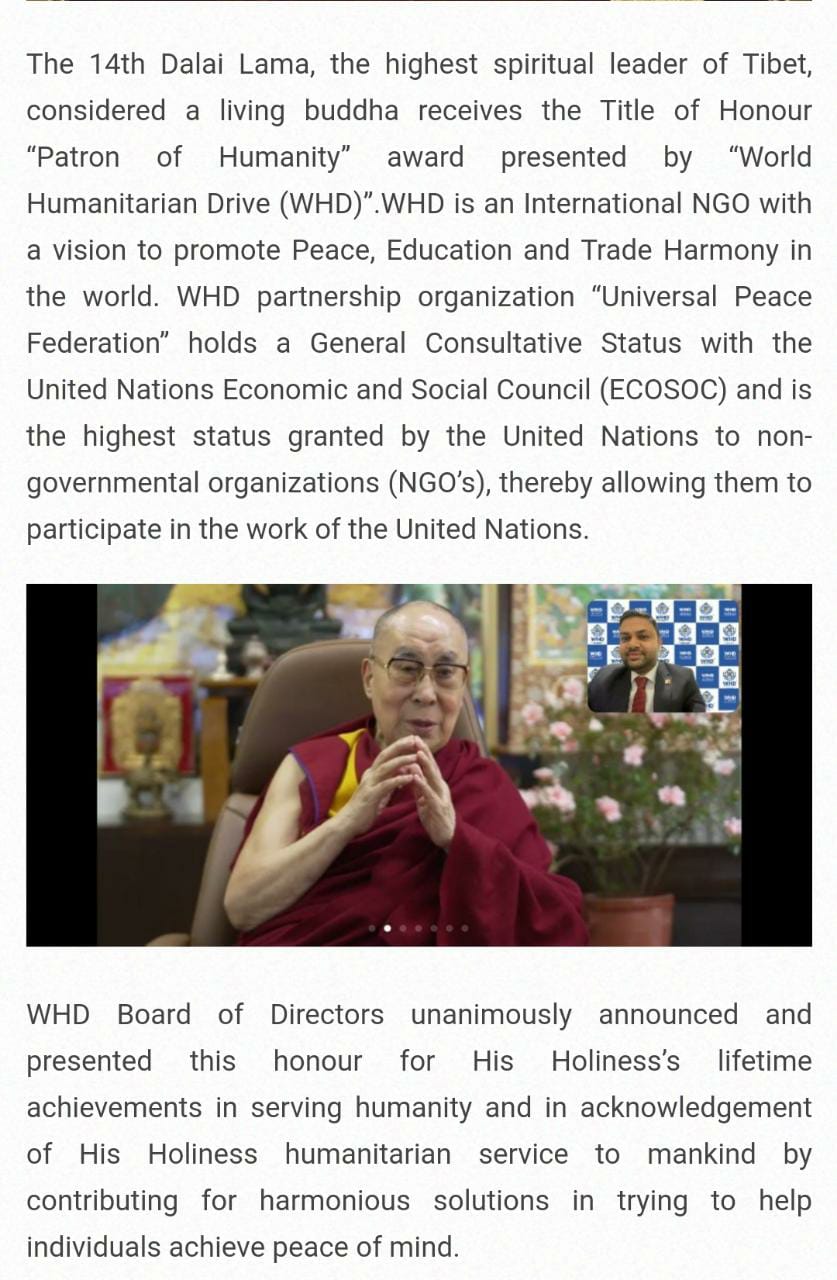 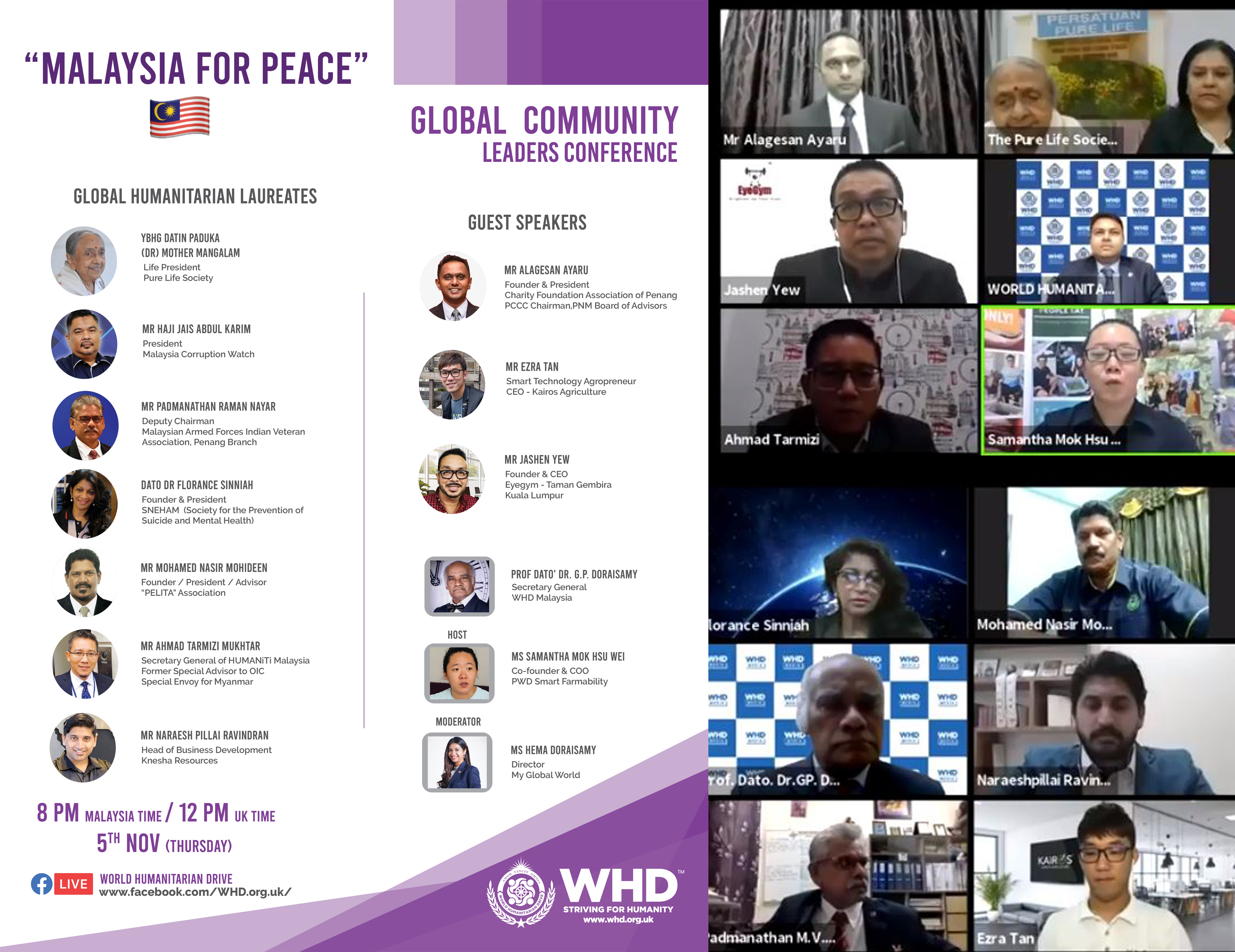 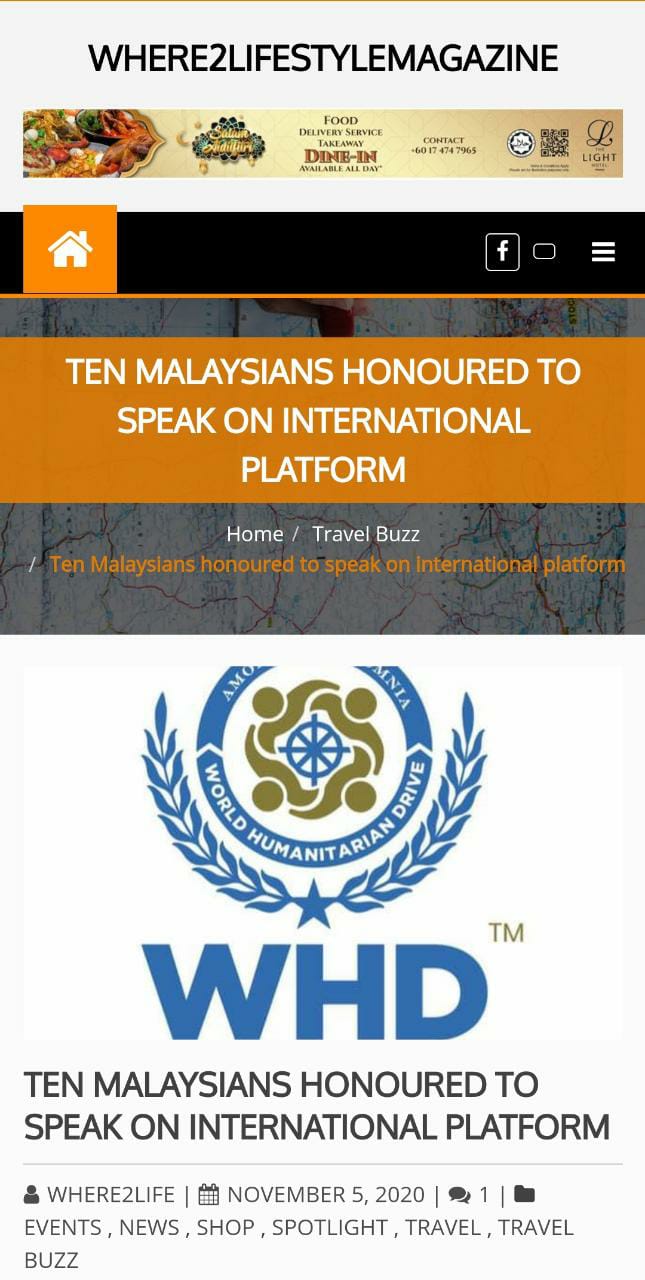 
In the resolution of unity and diversity, World Humanitarian Drive (WHD) Malaysia brought together eight international speakers from Malaysia, Russia, Germany, France and India in its inaugural online conference broadcasted live to more than 12 countries globally. WHD takes pride in organising this event by converging differently-abled leaders together who have shown courage and determination in promoting for humanity. WHD Founder, Dr Abdul Basit Syed quoted "The major objective of this event was to show gratitude and honour especially to these incredible people". The prosperity we enjoy has resulted from the willingness and selfless deeds rendered with the spirit of unity among diversity. 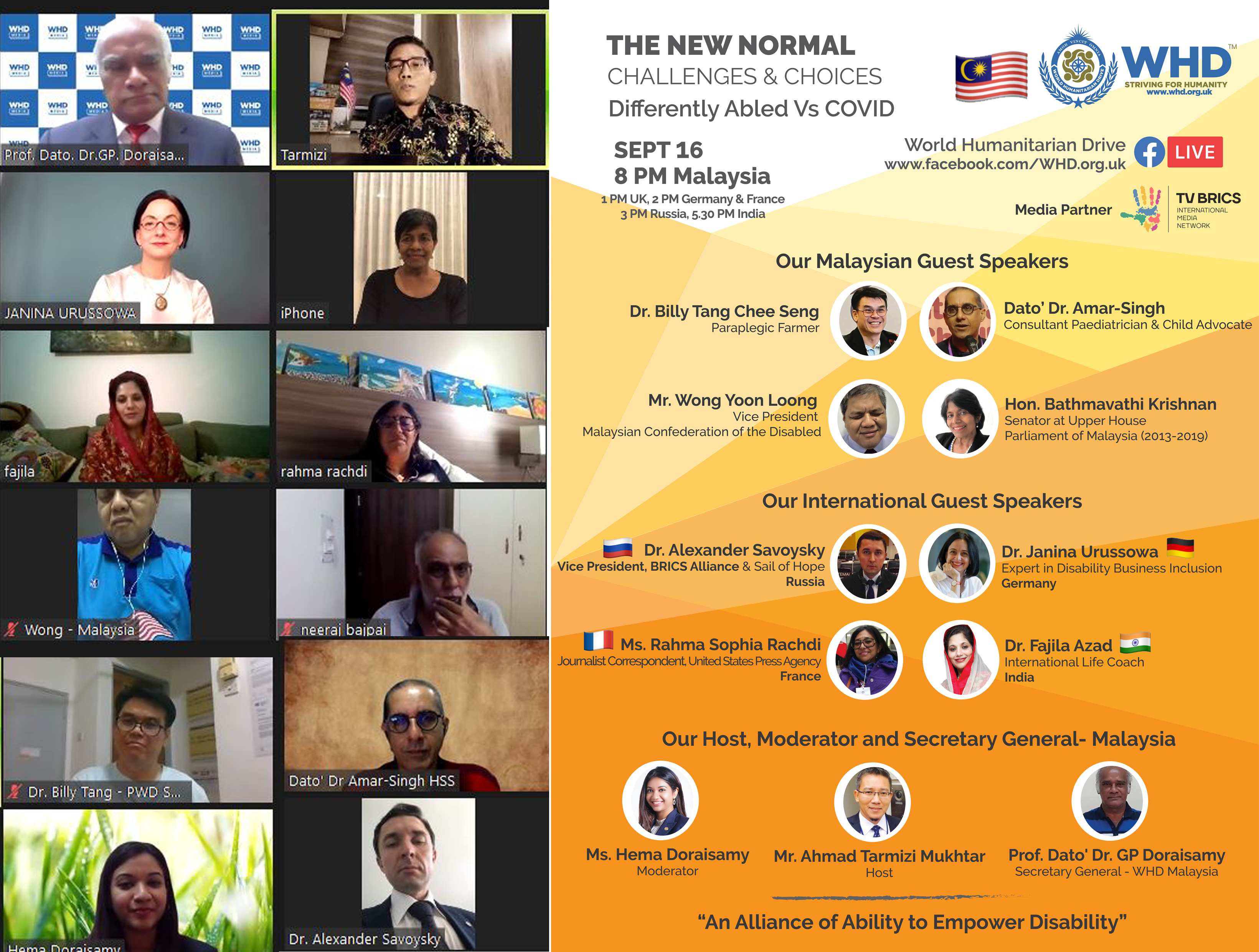 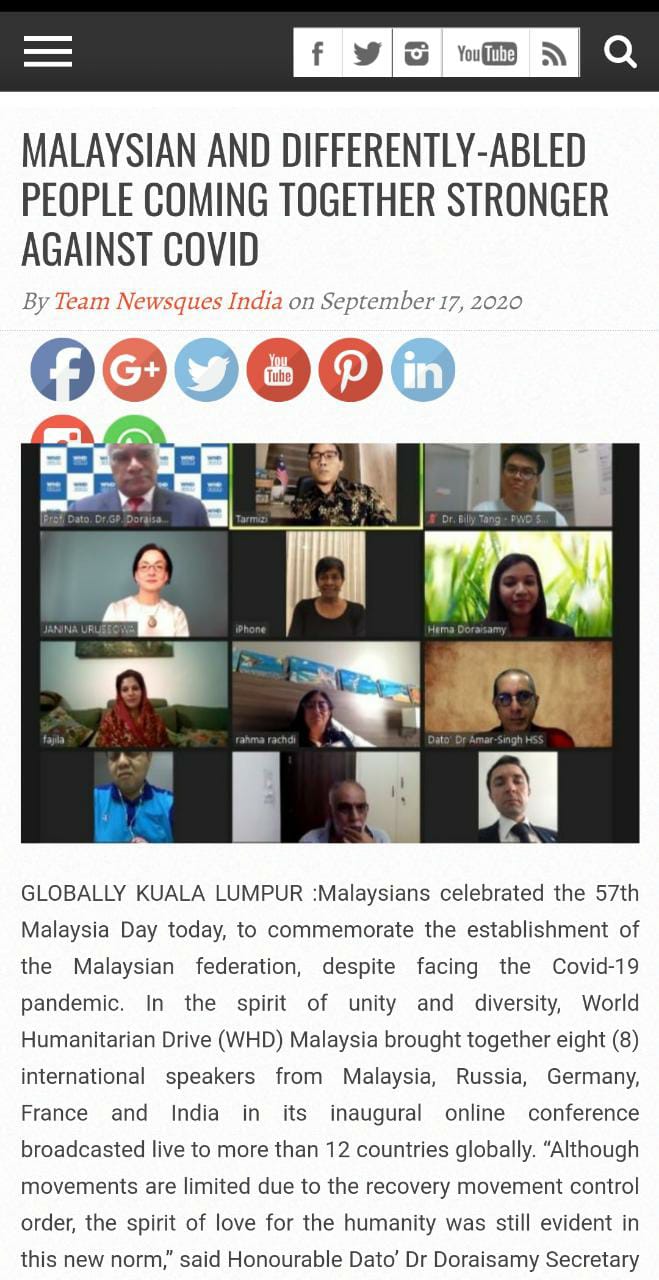 
WHD organised its first virtual event on 22nd of August 2020 in Bangladesh chapter by Mr Ratan Kumar Das, Secretary General of WHD Bangladesh. The Humanitarians Vision event showcased three well-known Humanitarian speakers known for their contributions to society. This program was organised to promote the idea of having a vision unified for Peace within humanity. WHD, as an organisation is pleased with the input of suggestions from the speakers. The concept of having a global society dedicated to building the idea of Peace is a noble vision. WHD intends to promote similar programs to facilitate humanitarian activities in Bangladesh through this event. 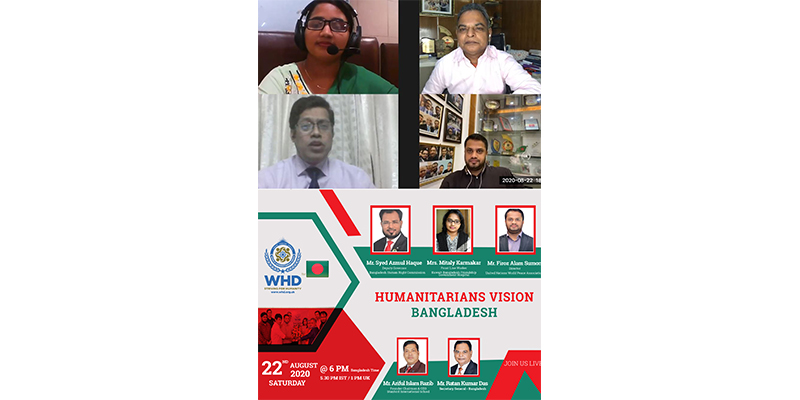 
Music can bring hope to our deprived hearts as a soothing solution to our problems in life. The lockdown during this pandemic stressed the minds and hearts in times of uncertainty. WHD desired to promote the idea of human values through music to have Peace in this world. Since it been a year WHD launched its first Korean Chapter with Dr Sharon Kim as Secretary General of WHD South Korea, it is now actively promoting our visions throughout the world for the sake of love for humanity. This event was organised on 19th of August 2020, to give the voice of love through music to humanity. Music plays an integral part, and it can transcend any barriers and transform society into a beautiful place. WHD is very keen to promote a similar event as a platform for more budding artists to inspire and hope to humanity. 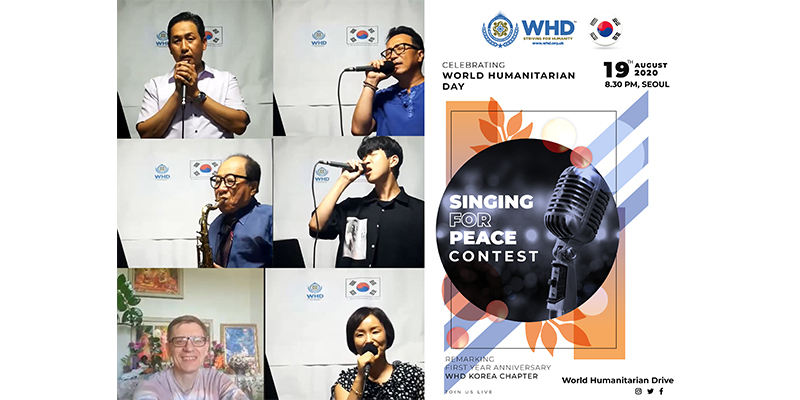 
During the global pandemic, lockdown, social distancing, restrictions on gatherings created social and economic upheaval and impacted on educational, business, hospitality industries etc.; Several changes are implemented and followed to contain the spreading of coronavirus. (WHD) has been organising many virtual programs to relate the current situations to encourage people’s involvement in such enlightening and instructional events. WHD Nepal chapter inaugurated, The Climate Action Talk 2020, a key to preserve environment and nature. Several changes and natural disasters were happening in the surroundings of our environment. The Global Climate is affected due to global warming and the current pandemic. Therefore, the conversational seminar was organised to discuss the environment and climate issues and reforms.

Speakers had Q&A sessions related to environmental and climatic conditions. The speakers shared their knowledge and insights from their respective expertise fields which were highly informative and productive. The program was conceptualised and shaped by Ms Janaki Gurung Secretary General of WHD Nepal. This event was streamed live on YOUTUBE from WHD media Channel. 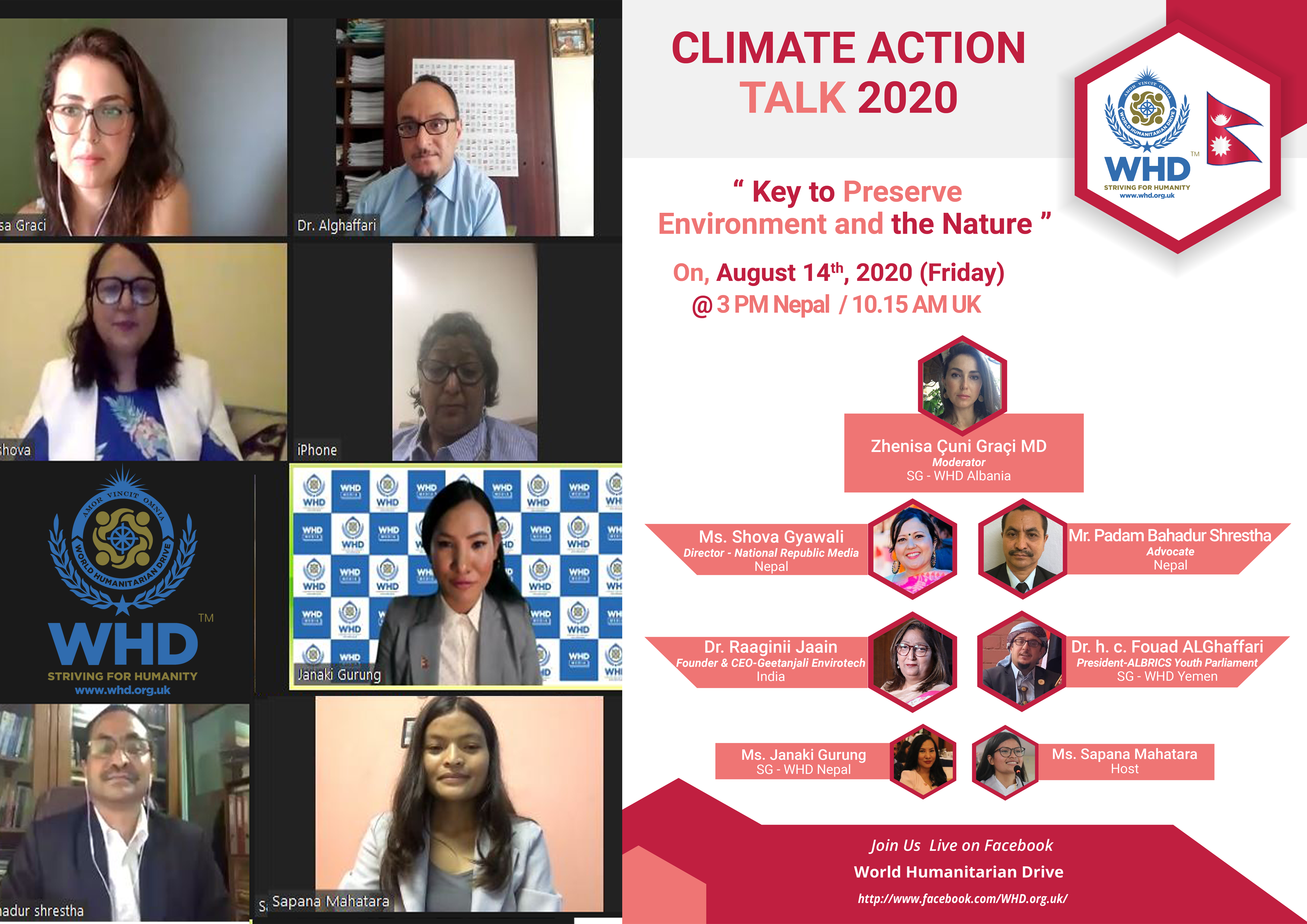 
The WHD organised a webinar to highlight the crucial problems of asylum seekers and issues of immigrant children. Four women leaders shared their ideas and thoughts in building bridges of hope to support and give a strong voice to the voiceless and to bridge happiness to families. The immigration sector embarked on their discussions on immigration issues and ended with a famous quote, “The opposite of love is not hatred but indifference”. 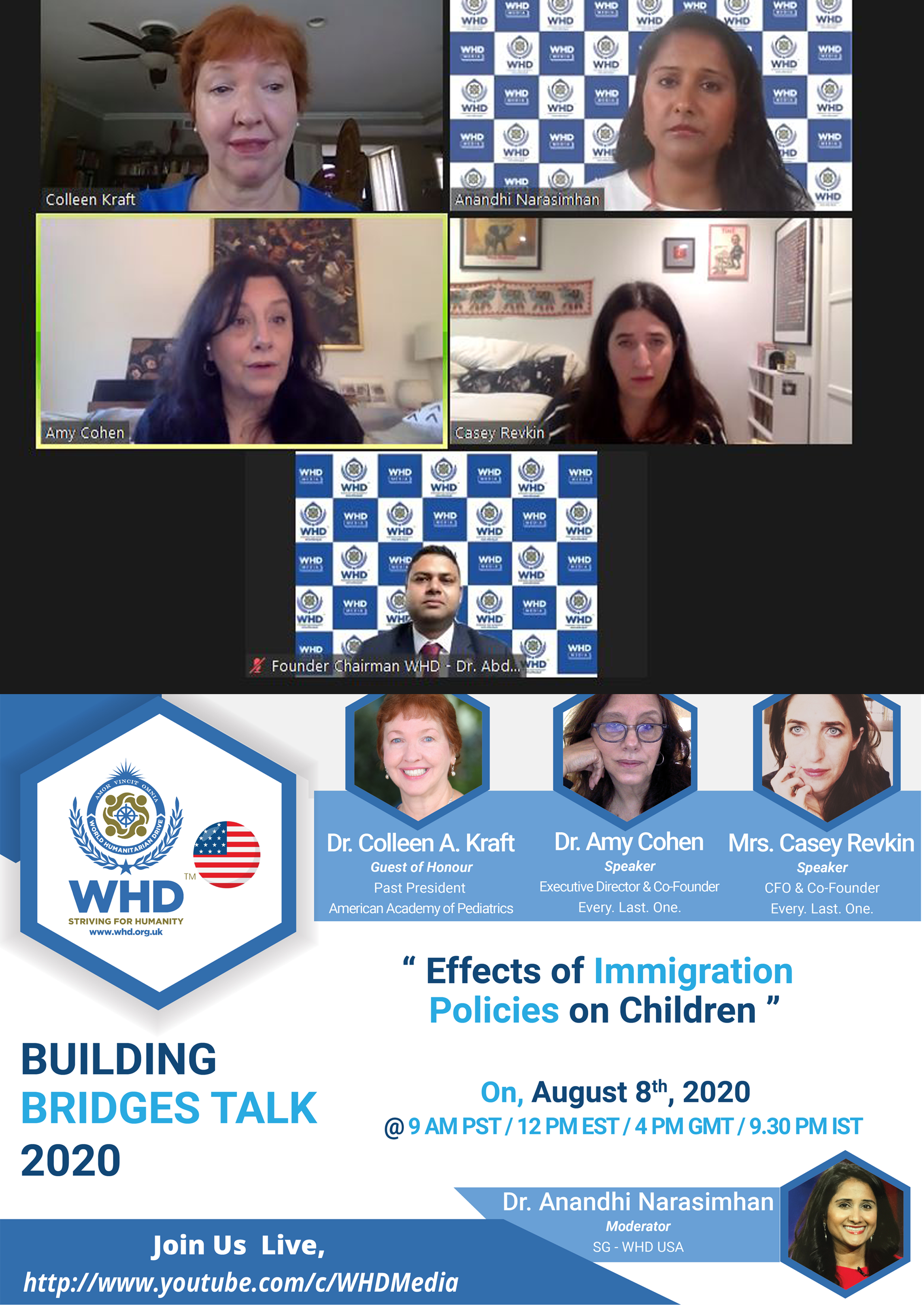 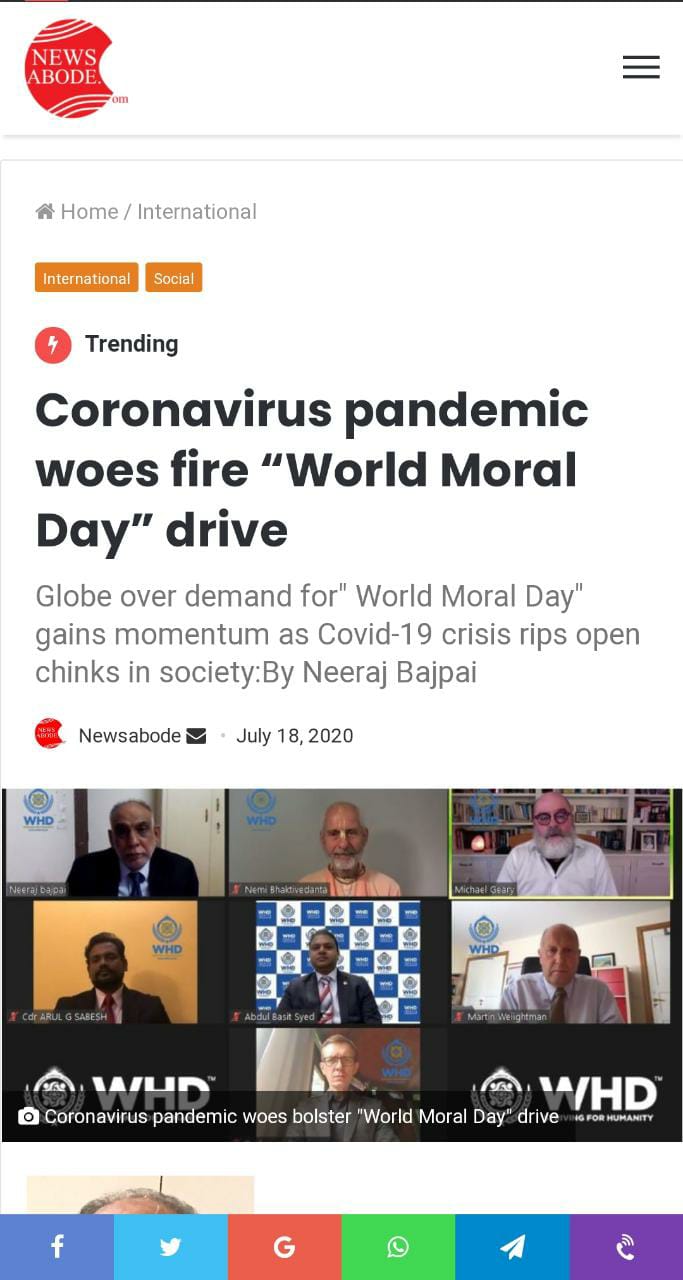 Read
World Humanitarian Drive Albania organised a virtual program held live on YouTube ‘WHD media’ channel on the 03rd of July 2020. The topic was ‘’European Integration challenges faced by Albania’’.This program aimed to raise voices of honest dialogue to raise awareness on the challenges each Albanian face during the European Integration process.


World-renowned PhD scholars gave their excellent speeches in support of our global campaign. They support our movement wholeheartedly to build a world with a moral foundation for the betterment of humanity #WorldMoralDay a colourful beginning. WHD India Chapter organised this event. 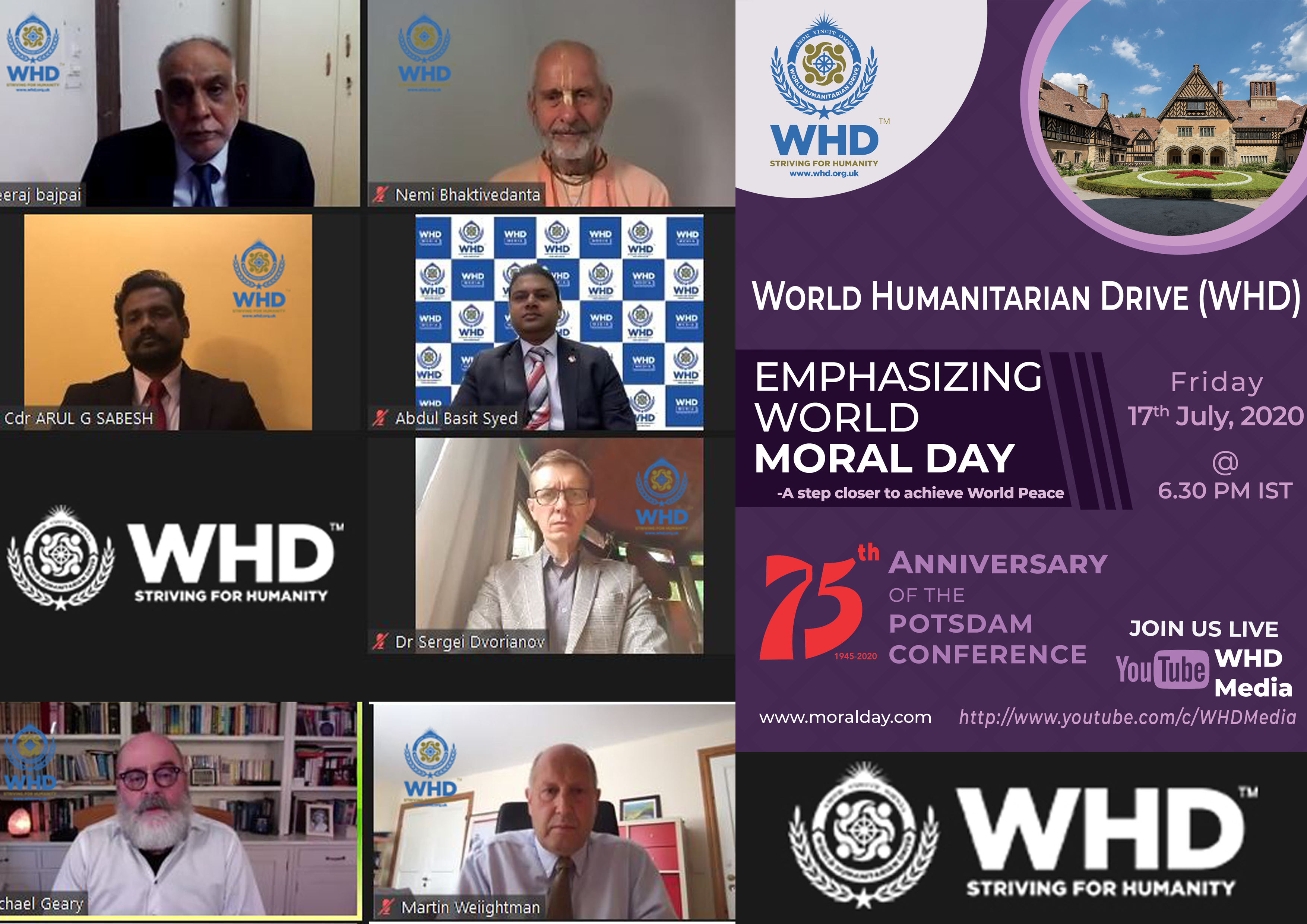 
World Humanitarian Drive Albania organised a virtual program held live on YouTube ‘WHD media’ channel on the 03rd of July 2020. The topic was ‘’European Integration challenges faced by Albania’’.This program aimed to raise voices of honest dialogue to raise awareness on the challenges each Albanian face during the European Integration process.

Ms Brikena Xhani Metaj moderated the program with Dr Zhenisa Çuni Graçi Secretary General WHD Albania who shared her thoughts on the crucial awareness of the changes and improvement. The four speakers shared their thoughts and vision on the reforms of the E.U.

The first speaker was Fatbardha Goxhaj, a nursing student of ‘’Universiteti Eqrem Çabej’’ Gjirokaster who shared her point of view as the challenges students are facing and the possible solutions. The second speaker was Sediola Ruko, a professor of ‘‘Universiteti Mesdhetar I Shqiperise’’. She spoke about the challenges of Albanian universities and available solutions to improve the quality of the education system. The third speaker was Esmeralda Keta, a journalist of Top Channel. She spoke about challenges in the media environment during the noble mission of serving truth and possible solutions also coming from E.U. itself. The fourth speaker was Gani Rroshi, Secretary General UPF Albania; He spoke about the role of universal values, cultural values that Albanians should hold on to and challenges to be faced while entering a postmodern society as E.U. 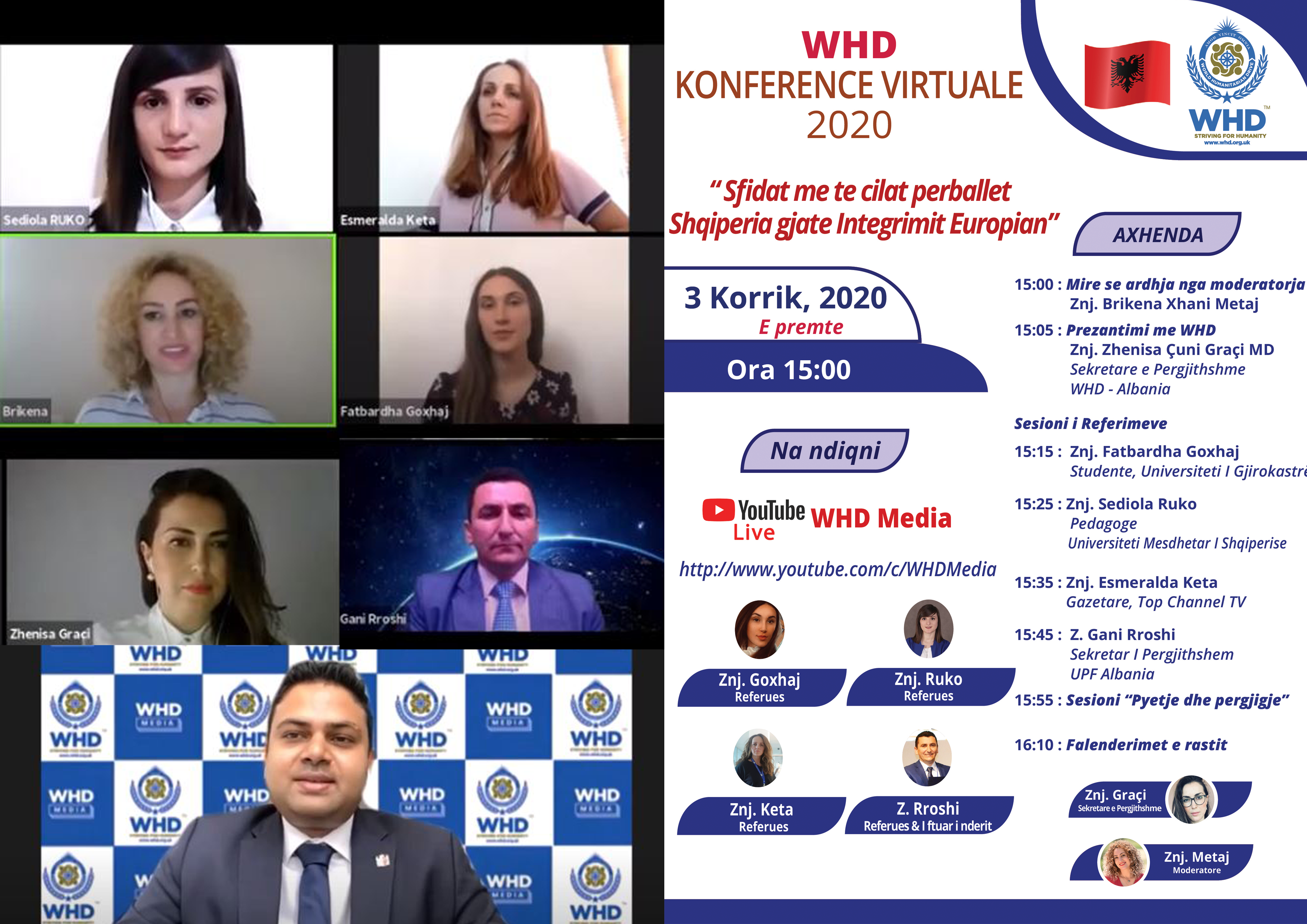 
In this global pandemic, several changes are observed and profoundly impacts social and economics globally. (WHD) has been organising many virtual programs to relate the current situations to encourage people's involvement in such enlightening and instructional events. WHD Nepal chapter encased with Debate Competition 2020, where youths of Nepal delivered their views regarding the topic "More relevant in 21st century - Science or Commerce". The academic environment is equally affected due to the pandemic situation. Therefore, the conversational seminar was organised to discuss the subjects to choose for their future. The program was conducted in an exemplar manner in the moderation of our Chief Guest Dr Dvorianov, Judge Ms Viva Andrada O'Flynn and Guest Eugene Ankomah. The event was conceptualised and shaped by the Ms Janaki Gurung Secretary General of WHD Nepal. 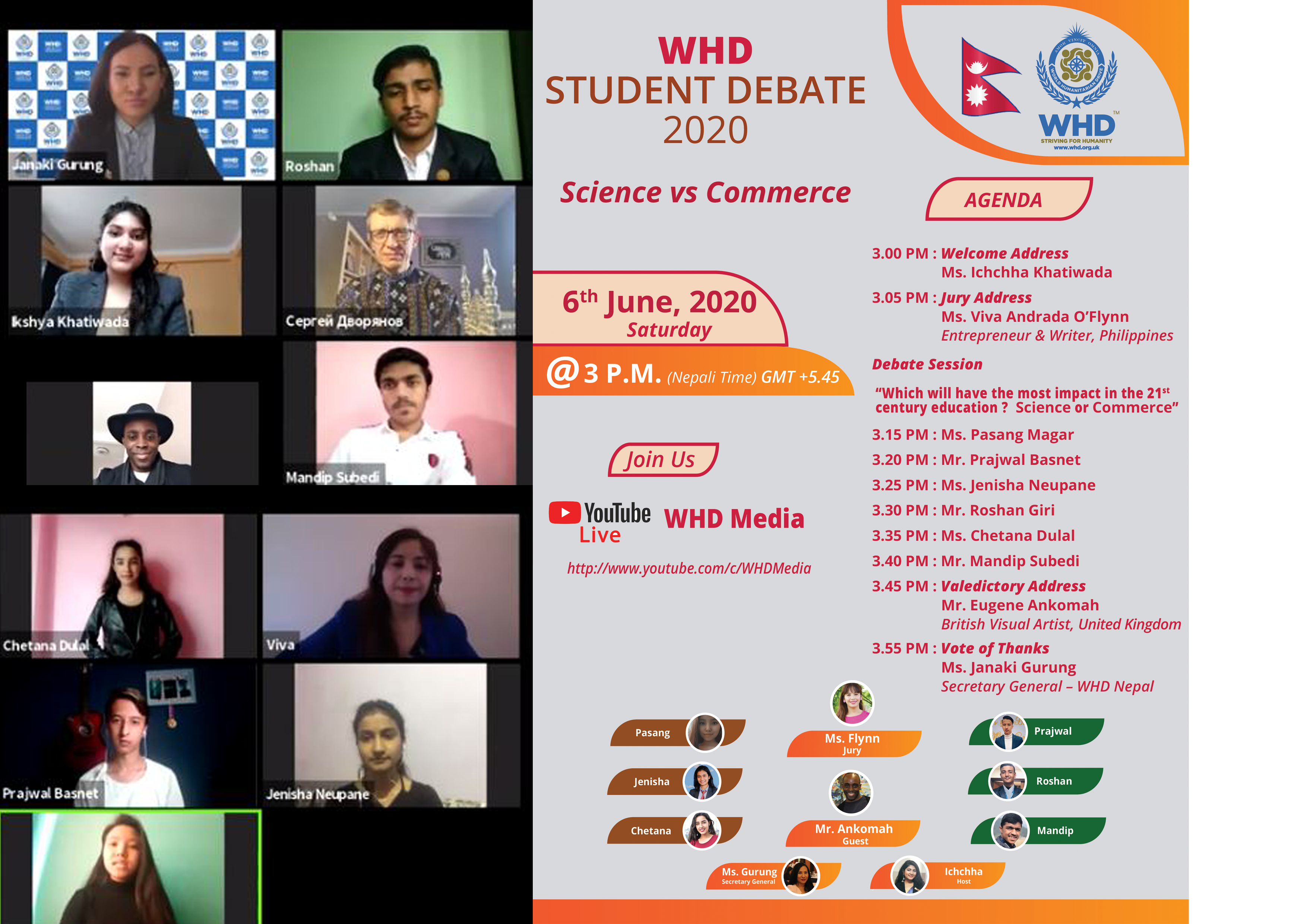 
WHD Business Conference 2020 is one of the events under WHD's global initiative "Trade 4 Peace". During these challenging times of pandemic, where every nation is inclined towards the verge of having a significant economic crisis. It is notable for people to be aware of Entrepreneurship and educated on financial Literacy. WHD Malaysia Chapter hosted an event on 30th of May 2020, and the keynote sessions were presented by each of the speakers followed by Q&A Panel Discussion.

Dr Abdul Malik bin Abdul Shukor, the Former lecturer from University Science of Malaysia, presented on Roadmap to Millionaire Entrepreneurship, he emphasised on the points on Entrepreneurship and shared his insight theoretical exposure. Mr Umar Shariff, a risk analytics professional from one of the big auditing firms presented on the topic of Building Entrepreneurship by adding the key points from his analytical exposure from multinationals and corporate firms. Mr Kenneth Yew, Master Coach and Founder of Vcare Ventures, spoke about Financial Literacy, and it's essential for the growth in an individual. Finally, Mr Maximus Pheng, the Founder of E2E Academy, spoke on Building Entrepreneurship from school to working adults, which encapsulated the methodologies to incorporate in the curriculum. Ms Hema Doraisamy was the moderator for the Q&A Panel Discussion, furthermore clarifies the topic of each speaker. The event concluded with the vote of thanks by Secretary General of WHD Malaysia Chapter - Dato' Prof.Dr. G.P Doraisamy 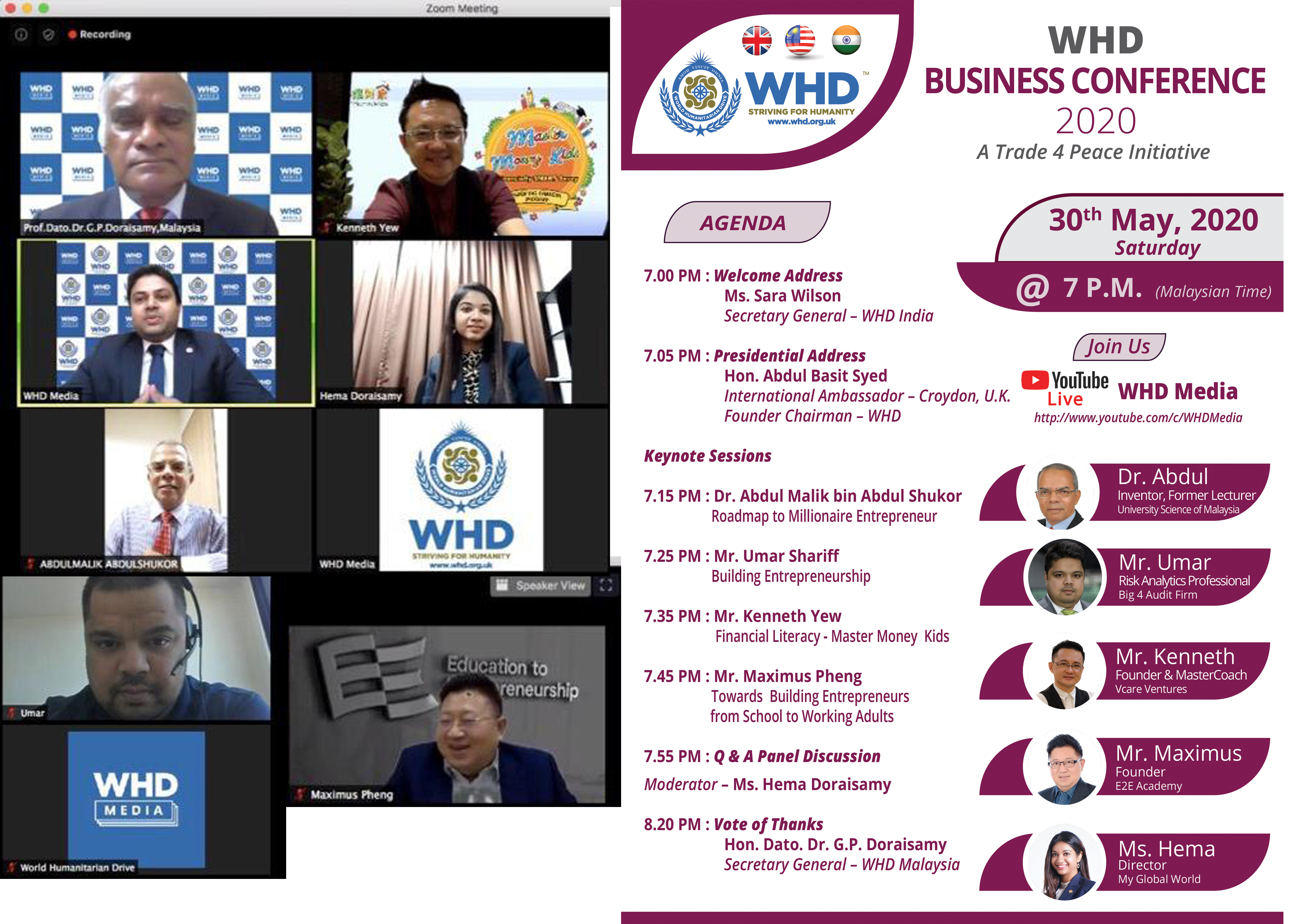 
This event held on 03rd of April 2019 at Croydon Town Hall, Croydon. Dementia is a condition where a person memories deteriorate in due time, and reduce their ability to communicate, perform simple daily tasks and reduces their freedom of choice. Its is a progressive condition that can lead to memory loss and difficulties with thinking, problem-solving or communication. In 2017 there were an estimated 3,611 people aged from 65+ living with dementia. It mainly affects those in this older age group; however, the onset of the condition can begin much earlier. In the U.K., dementia impacts the health of approximately 850,000 people.

Remembrance Sunday was held on the 11th of November 2018. This day was Remembrance to all who sacrificed to promote the noble objectives of Peace, Love, Equality and Justice for all humanity.

Government and Civic leaders and Hundreds of people gathered in Town Centre, besides war monument Croydon, U.K., to mark the 100th-anniversary concluding day of the First World War.

“World Humanitarian Drive” values Peace, Education and Harmony as our highest objectives.WHD organisation members with youth team volunteers have joined hands to promote Integrity and Solidarity. We support our fallen heroes by saluting the soldiers who sacrificed their lives in the First World War. We promote Peace by carrying “Remembrance Message of Tribute and Praise” signboards and placards, across Croydon High Street. Together with joining hands with the whole world, we are proud in remembering our heroes who laid their lives for everyone.

Croydon’s Mayor, Community & Civic Leaders and the public paid their reverence to those noble individuals who laid their lives in the First World War for Peace.

“They shall grow not old, as we that are left grow old. At the going down of the sun, and in the morning, we will remember them. “ 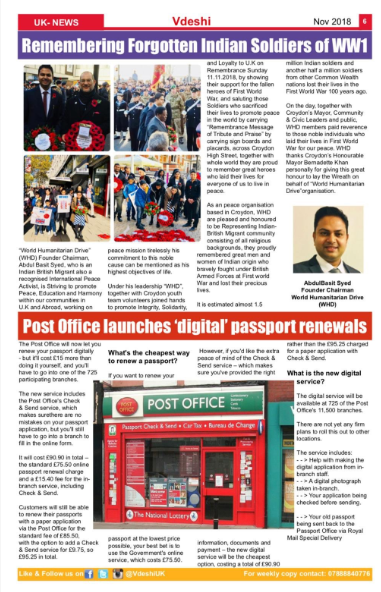 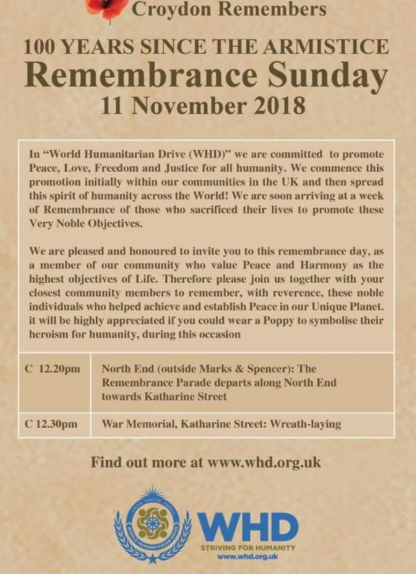 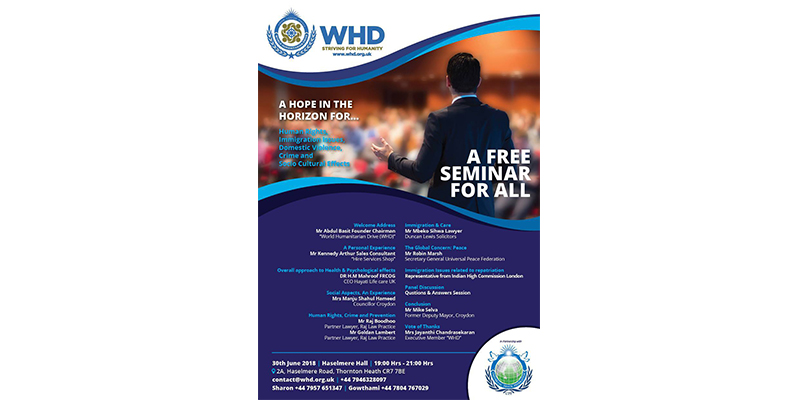